The 7th season of Style Fashion Week presented itself this month from March 9th through the 13th.  It took place downtown in Los Angeles at the LA LIVE Event Deck.  “Fashionistas, celebrities, VIPs and media from the United States and around the world were set to cover Style Fashion Week.  Style Fashion Week is the only one of its kind bringing together the top production and integrated marketing teams.” 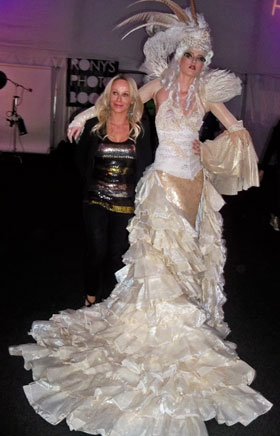 It was clear that the costume designs of Kicka Custom Designs demanded attention.  With its whimsical ruffles and grand head pieces, it brought a fantasy world to real life.  Award-winning costume designer Marika Soderlund-Robison who launched Kicka Custom Design in 2004, introduces you to a world you had no idea could even exist.  Born and raised in Sweden, Soderlund-Robison’s creations have appeared in rock operas, music videos, and in countless theatrical shows. Her dramatic and intricate designs evoke a fantastical and timeless sense of extravagance. “It’s avant-garde fantasy haute couture for artists, performers, and dancers working in television, film, and stage.”- Marika Soderlund-Robison

Early on in the evening we were impressed with the beautiful gowns presented by the Jaime Elyse Bridal Collection.  With it’s strategically placed tulle, lace, and delicate silhouettes we couldn’t help but be overwhelmed by its beauty with a since of joy.   As such, Success Blossoms reached out to know more about the designer and had the opportunity to interview Fashion Entrepreneur and Bridal Designer, Jaime Elyse to ask her:  “What do you like about being in business for yourself?”

What I learned as a Startup Entrepreneur
November 8, 2015

The future of WordPress help for entrepreneurs + ecommerce
September 2, 2015

Business Ethics and the Death of Yours, The Entrepreneur
June 3, 2015